Whale (Munster Simms Engineering Ltd) are delighted to announce that they have been included in the Sunday Times 100 Best Small Companies to work for list for the third year in a row. The Best Company Survey is now in its 12th year and Whale is again the only Northern Irish Company and only manufacturer to be listed in the SME survey. 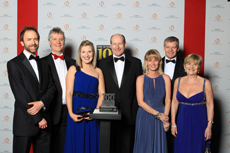 Whale, for its third year running, have been included in the prestigious Sunday Times Best Small Companies To Work For list and are delighted with this achievement. Given the difficult economic conditions, retaining the support and loyalty of the workforce has been central to the company’s continued expansion and commercial success.

Adding to the delight of being listed in the 2012 list was Whale’s move up the leader board by 19 places to 77. Given more than 1000 companies entered, to have improved the ranking position by such a significant step adds to the accolade.
This year, Whale was particularly commended for looking after the wellbeing of its staff, an overall ranking of 8th reflects the faith in Patrick Hurst, Managing Director and the employees trust in the “sound capabilities” of the leadership.

Patrick Hurst commented:
“To be listed again in 2012 is just fantastic for all the team at Whale. Our employees and their attitude and loyalty is what defines the business and is core to its continued commercial success. The Whale team are a credit to the company and themselves. They have all worked hard together to continually maintain the quality and introduce innovative, market leading products. The independent accreditation by Best Companies is a uniquely unbiased view of what the employees think of working in the business, to have their support ensures the company’s continued success.”

Listen to a snippet on the accolade from BBC Radio Ulster - listen from about 47:30 minutes.