Whale, A Sponsor At The RYA NI Annual Awards

Northern Ireland’s most talented sailors and dedicated volunteers have been honoured in celebration of their huge contribution to sailing and boating at the prestigious RYA NI annual awards.

Internationally successful sailors, rising stars and volunteers were all presented with their awards during a ceremony at the Belfast Harbour Commissioners.

Among the award recipients is 25-year-old Hammy (Andrew) Baker who received a special International Achievement Award.

Hammy, who hails from Quoile Yacht Club and Ballyholme Yacht Club, is the first person from Northern Ireland to complete the Solitaire du Figaro, a gruelling 2,015 mile race between five European ports – the unofficial world championships of solo offshore sailing. He received RYA NI’s Special Award for his successes and dedication to the sport over the last year.

He hopes to complete the challenge of a lifetime next year as he aims to be at the start line of the Solitaire again in 2016. Hammy then hopes to compete in the Volvo Ocean Race & Vendee Globe where he would sail solo around the world against top sailors from around the globe. 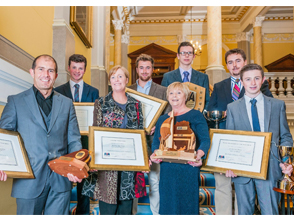 Hammy commented:"I feel very privileged to have received this award, it’s very humbling. I started sailing with RYA NI when I was younger and that’s how I became interested. Living and training away from home, it is very special for me to know that people appreciate and follow what I’m doing."

Speaking at the awards, Chair of RYA NI, Sheela Lewis said:"This is an excellent occasion to recognise the commitment of so many people to sailing and boating in Northern Ireland."

We have had many successes over the last year and our clubs and athletes have been fabulous ambassadors for our sport. I look forward to another thrilling year of sailing and boating as it is very evident that we have great talent within our clubs. On nights like this I am especially proud of all of our volunteers who have been invaluable to us. Volunteers are the bedrock of the sport and we are very grateful for all they do to facilitate sailing and yachting events throughout Northern Ireland.”

A Special Award also went to Kelley Rushton who until recently was the only female Coach Assessor in NI helping young people to develop to RYA instructor level. Kelley has also been integral to growing the sport of windsurfing in NI and has worked hard to raise funds for charities, including the Mary Peters Trust.

Cameron Date from Carrickfergus Sailing Club was crowned Young Volunteer of the Year.

Alistair McCarlie of County Antrim Yacht Club was announced as Club Race Coach Of The Year.

Instructor of the Year went to James Campbell from Coleraine Yacht Club.

James Ogg from Donaghadee Sailing who has been hailed a club hero, picked up Volunteer of the Year Award.

The night ended on a high with Belfast Lough Sailability announced as Club of the Year. Making a positive impact on the lives of many people in Northern Ireland, BLS continues to work hard to offer sailing to people with a disability and their entire family unit. The organisation provides respite for parents, carers and siblings and promotes activities that the whole family can take part in.