Patrick Robert William Hurst, Managing Director, Whale (Munster Simms Engineering Ltd) has been honoured with an MBE in the 2012 Queens Honours list for service to the Northern Ireland Business Community.

Patrick is currently involved in a number of business activities, which include the role of Managing Director for Munster Simms Engineering as well as working on behalf of Invest NI, and a number of privately owned manufacturing companies as an Independent Business Advisor.

As a co-owner of Whale (Munster Simms Engineering Ltd) Patrick’s innovative vision has resulted in increasing turnover by 48% between 2009 and 2011 as well as increased workforce by over 50% since 2008. Hurst’s drive for innovation has inspired his design team and today 70% of products are new or have been significantly re-engineered in the last 3 years.

Faith in Patrick’s leadership was confirmed by the company being listed in the Sunday Times Best company to work for survey for the last 3 years running. Whale was particularly commended for looking after the wellbeing of its staff, an overall ranking of 8th reflects the faith in Patrick Hurst, Managing Director and the employees trust in the “sound capabilities” of the leadership.

In response to the news, Patrick Hurst, stated that: -

It is very humbling to receive such a tremendous honour, and it is made all the more special given that it is the Queen’s Jubilee year. I have been so lucky to have worked with many great people in Northern Ireland and to have such a supportive workforce. It is a real privilege to have been recognized for contributing to the business community.’

"Everyone in the company is delighted to see Patrick's huge dedication to Whale, and to our people, recognised with this honour. He is a consummate leader and this award is also, we are sure, a tribute to all that Patrick does outside the company, to try to improve economic conditions for our whole community."

Patrick is currently involved in a number of business activities, which include the role of Managing Director for Munster Simms Engineering as well as working on behalf of Invest NI, and a number of privately owned manufacturing companies as an Independent Business Advisor.

Previously, Patrick worked for the Wright Group starting in May 2000 as General Manager of Expotech, the export division of the company. He began to develop export markets and took the company to Europe for the first time, launching left hand drive city buses in the Netherlands.

In 2001 he was promoted to Managing Director of Wrightbus Ltd and then in 2003 to Vice President Wright Group.

In 2006 Patrick re-joined Munster Simms Engineering as Managing Director; the company where he initially started his business career in 1989.

In early 2008 Patrick, along with his two fellow directors, completed an MBO/MBI of Whale (Munster Simms Engineering Limited).  He currently has a one third shareholding in the company.

Patrick is a graduate of the business school of the University of Ulster and has a Masters in Marketing.

Throughout his working life, he has travelled extensively in North and South America and Europe, and lived for a period of time in the USA.

In 2011 Patrick was a finalist in the Ernst and Young Entrepreneur of the Year (International category).

Patrick is age 44.  He is married to Jenny and they have two young sons. 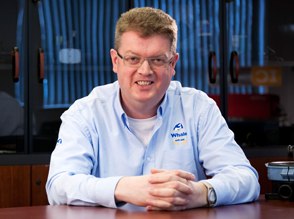